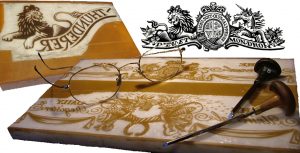 The Times
The Masthead, the Thunderer and Daily Universal Register are wood engravings on polymer blocks. They were proofed and re-cut constantly during the design process, but as digitisation evolved, treatment of the final proofs differed.The finished artwork for the mastehead was printed from the block on gesso paper with a platen press, whereas final proofs for the Thunderer and Daily Universal Register are digital. Polymer blocks are dense and feel very like box wood to engrave. The tools used were mostly nineteenth century trade engravers tools. The masthead block is resting on an engraver’s sandbag: a device for turning the block that probably dates back to armourers.